This post is based off the notes I made while setting up Home Assistant in a virtual machine running the Home Assistant OS image on an Intel NUC i3. My existing setup was running on a Raspberry Pi 3 which was starting to feel a bit sluggish while also using a somewhat unsupported manual docker setup. The full Home Assistant OS manages upgrades and would hopefully simplify management and backups.

At least that was the idea…

There was quite a bit of trial, error and frustration getting this setup the way I wanted. Finding the combination of resources that I was after was scarce which is why I wanted to share my notes on the setup. I’m not yet done migrating settings over and so the post does not cover migration or in fact much Home Assistant specific setup at all. Bringing up a decent virtualized environment turned out to be enough material in itself.

I want to stow the NUC away out of sight and primary manage it from the command line. The host hypervisor is a fairly minimal NixOS installation and I see no reason to setup a display server on it. That also includes managing the guest VMs through the command line instead of graphical tools like virt-manager. VMs are managed by libvirtd and while some configuration is done through the virsh shell the setup also uses some of the auxiliary tools from the virt-manager package.

Most of the NixOS configuration is plain standard stuff, but a few libvirtd options must be enabled:

The Home Assistant VM needs to talk to various devices within the home which is why it should also be on the same network as the home devices. Most virtualizers default to use NAT-based networks which means that some configuration is to be expected in order to expose the virtual network interface to the external local network.

With the luxury of multiple network cards a machine can dedicate one directly to the guest VM, simplifying the network configuration of the host. The NUC, however, only has a single network interface, not counting the WiFi adapter. This means that the physical network adapter must be shared between the host and the guest by allowing the guest to expose its virtual network adapter as if it was a physical one. A bridged network setup is what’s commonly used for this scenario.

Once the configuration is applied ip addr show would list something similar to the following:

There we see both the physical eno1 interface and the br0 bridge.

Once the host network has been configured the way we want it a virtual network must be configured for the guest to use later. I don’t think I’ve ever used libvirt before and besides having used VirutalBox and VMWare extensively for work-related VMs I’ve only occasionally done simple manual qemu launches when streamlining e.g. a NixOS bring-up. When not using GUI tools like virt-manager it seems like virsh is the Swiss army knife in the world of libvirt.

Luckily a bit DuckDuckGo-fu got me well enough through the maze of virsh sub-commands.

Several elements exposed through virsh are configured by editing small snippets of XML and importing them. It would’ve been great with a more interactive configuration option for newbies like me unfamiliar with the XML configuration structures of libvirt. At least there are relaxng schemas that detect invalid structure of the XML automatically.

Whispers off the internet told me I wanted to create an XML file specifying the bridged network setup which is tied to the br0 bridge interface:

This network can the be added/defined using the net-define sub-command:

Once the image is downloaded it should be moved somewhere you would like to store disk images. It’s convenient to create an install script that invokes virt-install with all the specs for the guest VM because it makes it a lot easier to tweak settings later.

After running the script the VM should be visible in virsh:

Home Assistant is mainly configured using the Lovelace Web UI, but for initial configuration and management the Home Assistant OS also provides the ha command line. To my knowledge the guest does not run any SSH server by default so the best way to reach the console is using some remote monitoring protocol like spice or vnc.

The install script configured the virtual machine with spice graphics which can be viewed from a remote machine using remote-viewer:

Hopefully you’ll be greeted with the first glimpse of your new Home Assistant VM! 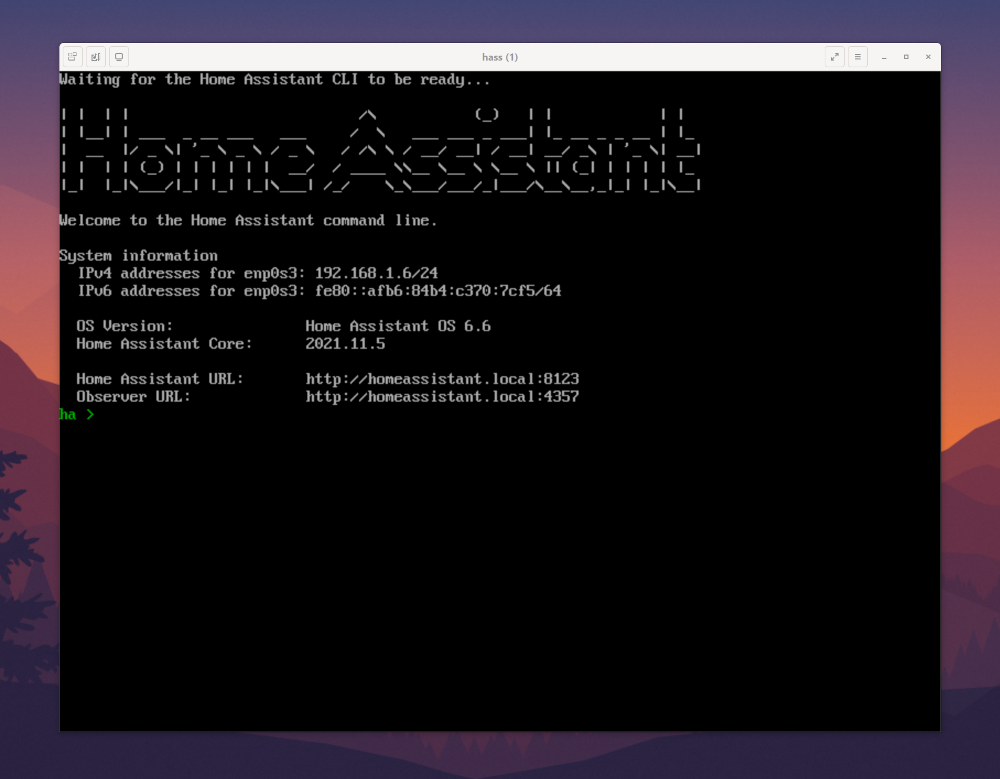 One potential source of trouble at this point could be the NixOS firewall blocking the spice port. Ensure to either open the port specifically or disable the firewall entirely:

…and if everything has gone smoothly up to this point the Home Assistant web UI should be accessible through the static IP on port :8123: 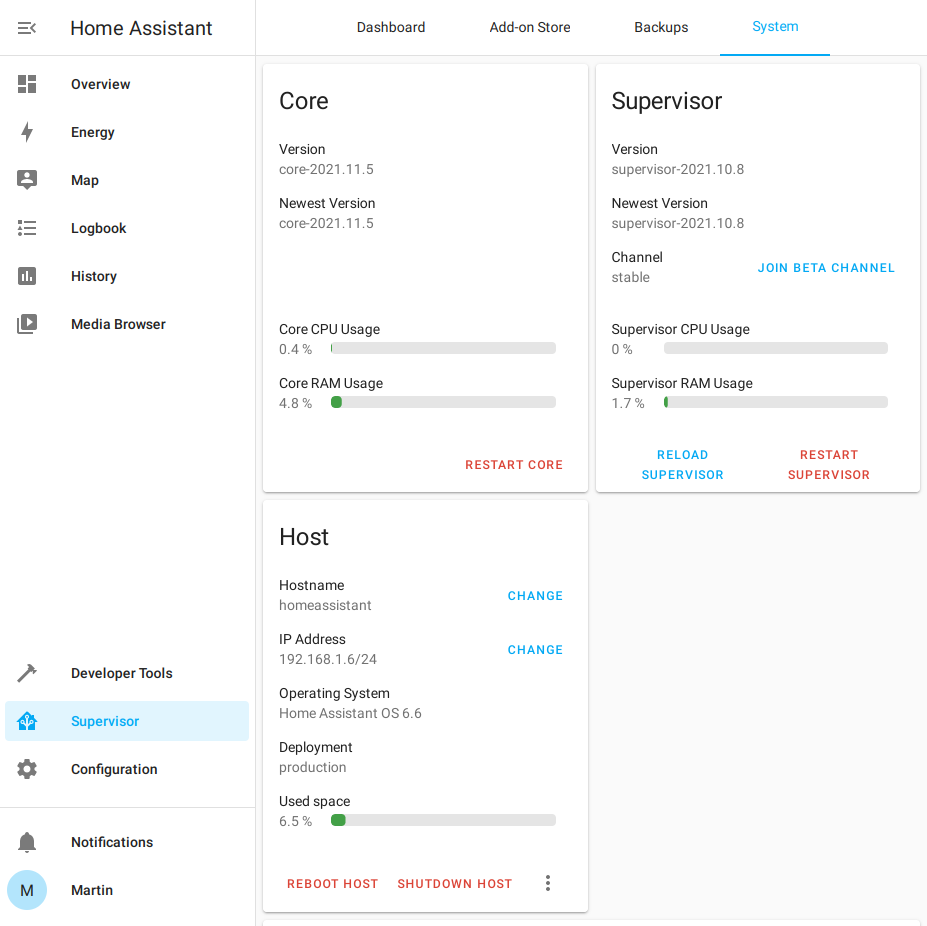 Bridge USB devices to the guest

An increasing amount of the devices in our homes are getting “smarter”. Basically that’s your toaster or dishwasher growing TCP/IP capabilities and getting intimate with your home WiFi. Yet in the era of IoT it’s comforting to know that not all devices speak the language of the internet and for numerous reasons1 other protocols are prevalent in home automation systems.

Two wireless communications protocols in wide use today are Zigbee and Z-Wave. A WiFi adapter card doesn’t speak these alternative protocols and an adapter must be used in order to integrate Zigbee and Z-Wave smart devices into a home automation controller. For the Raspberry Pi I used the RaZberry Z-Wave adapter card, which is a PCB specifically designed for the Raspberry Pi. For the NUC I went with the Aeotec Z-Stick Gen5+ USB dongle: 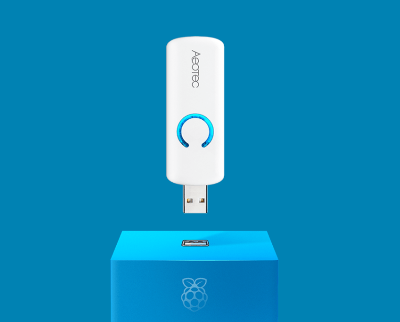 In order to use the dongle from the guest VM the adapter must be bridged from the host into the guest. In order to do that some product details are required.

Find the desired device in the list and note the vendor and product IDs, the numbers joined by a single : and no whitespace.

Write an XML file with the device setup

Create another XML file with the following structure and fill out the vendor and product tags for the specific device:

Attach the device to the guest by invoking the attach-device command with the XML file path: 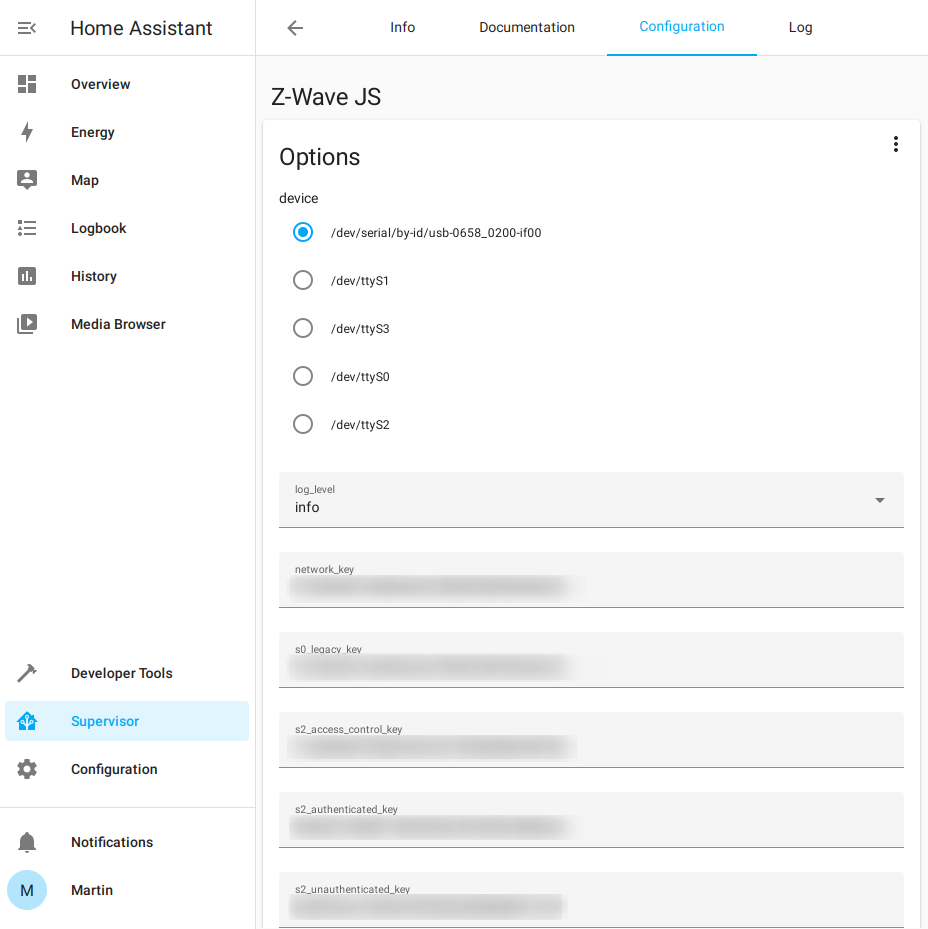 For certain devices like the Aeotec Z-Stick Gen5+ Home Assistant is able to automatically detect the dongle making configuration simpler. Otherwise I guess it’s just a matter of finding the /dev device path for the configuration.

At this point I’ve got the Home Assistant OS running in a VM on an Intel NUC just as I planned. What remains is to start migrating and setting it up with a similar configuration to the Raspberry Pi.

While in the end the steps to setup the Home Assistant VM were actually quite few and simple the road to get there was bumpy. One of the things that really did trip me up was getting the network configuration right. Once the right combination of NixOS options were set and some tweaks to the libvirt bridged network configuration it all just suddenly worked and I’m super pleased with that.

Virtualization is great when there’s not a need for superior performance. The power of the NUC has no trouble running the Home Assistant VM while being host to various other simple tasks. What remains now is to port over the actual Home Assistant configuration from the Raspberry Pi. With the Pi freed of its current duty I have other plans for it to serve a purpose in the home.